Inicio » News » Uruguay » Tax Collection by the DGI in June

Tax Collection by the DGI in June

According to El País, net tax collection reached $33,482 million and grew 12% in real terms compared to the same month of 2020.

VAT revenues from this tax reached $18,218 million in June. Thus, it represented 46.7% of the total gross collection.

IRPF collection amounted to $6,140 million in June and represented 15.7% of total revenues.

In this sense, the total gross tax collection of the Dirección General Impositiva – DGI (General Tax Directorate) amounted to $38,990 million in June, i.e., real growth of 9.6%.

According to the DGI, Total Gross Collection in the last 12 year-on-year variations at constant prices was as follows: 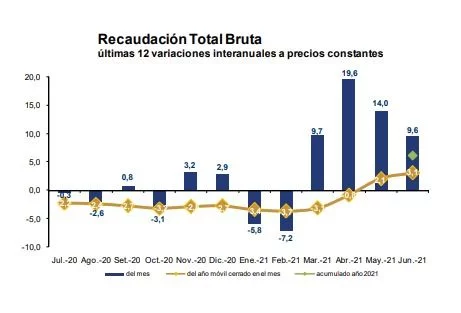 According to El Observador, excise taxes were the main source of income for the State Fund with Ch$21,987 million and a growth of 16.1% in the month.

Among them, the VAT and IMESI collections stand out, emphasizing that the real variation for this tax was 67.4% in June, with a strong expansion in fuels, automobiles, and beverages.

The importance of the National Contact Point in Uruguay

The Ministry of Economy and Finance of Uruguay has held a seminar to explain the objectives under the OECD guidelines.

The ” Conexión” website comments on the concern expressed by the municipal chiefs regarding the exchange difference with Argentina.

Modification to the IRAE and IP liquidation criteria

Through Resolution No. 1,435/2021, the General Tax Directorate provides for the modification of the liquidation criteria for the IRAE (Impuesto a las Rentas de Actividades Económicas – Income Tax on Economic Activities) and IP (Impuesto al Patrimonio – Wealth Tax) concerning the extension of the established deadlines.

Our organization elevates its commitment to quality and is now an ISO 9001 certified company.

Distinguished as a Recognized Firm of
Transfer Pricing in Latam

Winners for Transfer Pricing Firm of the Year Bolivia